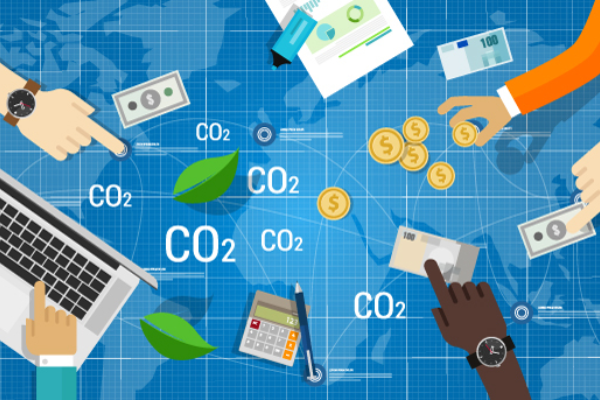 A market in time: carbon trading and net zero

Last week, Joe Biden convened a summit of 40 world leaders (albeit over Zoom) for his Leaders Summit on Climate, a keystone event in his twin bids to restore American global leadership and spur forward his own climate agenda. Biden's own pledge to cut carbon emissions in America by at least 50% won headlines and praise, as did similar commitments from Japan, Canada and the UK. Setting ambitious targets requires some political fortitude, but the real challenge is working out how to reach them. For now, the White House is placing spending at the heart of its plan to cut emissions: around half of its proposed $2tn infrastructure package is earmarked for green issues such as renewables, electric vehicles and retrofitting homes to be more energy efficient. A combination of spending and enhanced regulatory standards may help to dramatically reduce emissions.

Yet many observers, and some participants, noted a general reticence to address a proverbial black elephant in the room: the question of a carbon price. French President Emmanuel Macron was one of the notable exceptions:

The vexed question of whether and how to price carbon has been vigorously debated for over a decade. Essentially, there are two possible methods: introducing a fixed carbon tax, or building an emissions trading system (commonly known as cap-and-trade). Each approach has plenty of benefits and drawback. The key distinction, though, is that whereas a carbon tax defines a fixed price for emissions, and hopes that this price achieves the desired reductions, a cap-and-trade system defines a maximum allowable level of emissions in a given jurisdiction, and creates a market dynamic that facilitates continuous price discovery for carbon emissions. Of course, both approaches raise similar issues. How do you know where to set the bar, whether in dollars or tons of CO2? And which method would be more effective in reducing emissions?

In 2017, a World Bank Report led by renowned economists Joseph Stiglitz and Nicholas Stern concluded that in order to reach the Paris temperature targets, the effective price of a ton of CO2 would need to be between $40-80 by 2020, and $50-100 by 2030. Although these ranges are strikingly wide, they do at least provide a ballpark sense of the likely dollar figures involved. The report also found evidence of both approaches working well in tandem: the combination of the EU cap-and-trade system and a top-up imposed by the UK government saw British coal power plants "reducing their emissions by 58% in 2016".

The EU's cap-and-trade scheme - dating from 2005, and officially known as the Emissions Trading Scheme - is one of three major active carbon trading systems; the other two are the California Cap and Trade Program, and the Regional Greenhouse Gas Initiative (RGGI), which includes ten states in Northeast America. Assuming that the schemes in place are effective, this is a good start in terms of reducing global emissions; the US and the EU were the world's second- and third-largest emitters in 2017, and that year the state of California emitted more CO2 than all but 18 countries:

By the same measure, though, many of the world's top emitters don't yet have a functional carbon trading system in place. China, which recently announced its aim to achieve carbon neutrality by 2060, only launched its cap-and-trade system at the start of February; India and Russia have no immediate plans to follow suit; and Texas - which would rank as the seventh-largest emitter if it were a country - is unlikely to introduce a trading program for carbon emissions (though it does have one for nitrogen oxide emissions in the local Houston area).

By far the most significant of the mature carbon markets, the EU's ETS has just entered its Phase 4, having been launched way back in 2005. The 3-year initial pilot covered about 40% of EU CO2 emissions, but came under some criticism for setting overly lenient limits; the second phase (2008-2013) tightened up these restrictions, but the carbon price came under heavy downward pressure due to the 2008 crash and its lengthy aftermath across Europe. Phase 3, which lasted until the end of 2020, arguably heralded the maturation of the market, with new funding mechanisms, broader inclusion in the market, and an EU-wide carbon cap, all of which buoyed prices form around €6 in 2013 to above €30 by the end of the phase.

The development of the ETS carbon price over time is displayed below. Broadly speaking, carbon prices rise with emissions (often correlated with economic activity), because there are fewer 'spare' carbon credits to be traded, and demand is higher. However, Phases 3 and 4 of the ETS also introduced a 'linear reduction factor' that reduces the overall emissions cap each year; for this new Phase, that factor has been increased from 1.74% to 2.2%. The combination of economic growth and tighter caps pushes the price of carbon up:

While carbon prices in the EU have dramatically increased since 2013, the current level of around €45 (or $55) is still at the low end of what Stiglitz and Stern suggested was the necessary price range in 2020. What's more, while the EU ETS looks to have contributed to a meaningful reduction in Greenhouse Gas emissions across the region, the EU's own climate targets (likely to be made even more ambitious over the coming years) indicate that more dramatic action is needed. The latest EU climate plan aims to achieve a 55% reduction in emissions by 2030 compared to 1990 levels - yet even the introduction of additional proposed climate measures is only expected to achieve a reduction of less than 40%:

To achieve the EU's goal of 55% reduction by 2030 - not to mention net-zero by 2050 - far more dramatic action will be needed. It stand to reason that the ETS regime will play a key part in that effort.

It's worth briefly considering the behaviour of the EU EUA, which is the commodity security of a tonne of carbon emissions. Over the past the past three years, its price has more or less tracked macroeconomic fortunes, oscillating in the €20-30 range for much of 2019 before crashing to almost €15 at the onset of COVID-19, which hugely impacted demand. Since then, it has shot back up to around €45, reflecting increased economic activity and optimism, as well as the emphasis political leaders are now placing on tackling climate change. For instance, as shown below, prices increased from €25 to €35 between Biden's election and inauguration:

The above chart also shows how, for a commodity, there's relatively little divergence between the futures contracts of varying lengths. This is shown in greater detail below; although the overall level of the carbon futures curve has been rising steadily, the steepness of the curve has remained relatively gentle:

This, of course, is the upshot of a commodities market that is based not on the vagaries of geopolitical tensions or supply-chain problems, but on relatively predictable ground rules set by the EU, the market's governing regime. Even so, investing in carbon emissions - essentially, taking a view on the likely tightening of climate regulation - used to be a complex undertaking, much like regular commodity training. Last summer, though, the first "Carbon ETF" was launched: KraneShare's Carbon ETF (KRBN), which aims to outperform the IHS Markit Global Carbon Index. That index tracks carbon futures in the three most active carbon-trading schemes (which at the end of 2020 had a combined market size of $260 billion). So far, the ETF seems to be tracking its index fairly well; it would seem to have made the world's carbon markets far more easy to invest in:

Whether the KraneShares ETF becomes a significant option for investors or not, its development would seem to indicate the maturation of the carbon emissions market. Strange as it may seem, this artificially-created commodity might yet play a significant role in saving the planet - and could make for an attractive investment along the way.